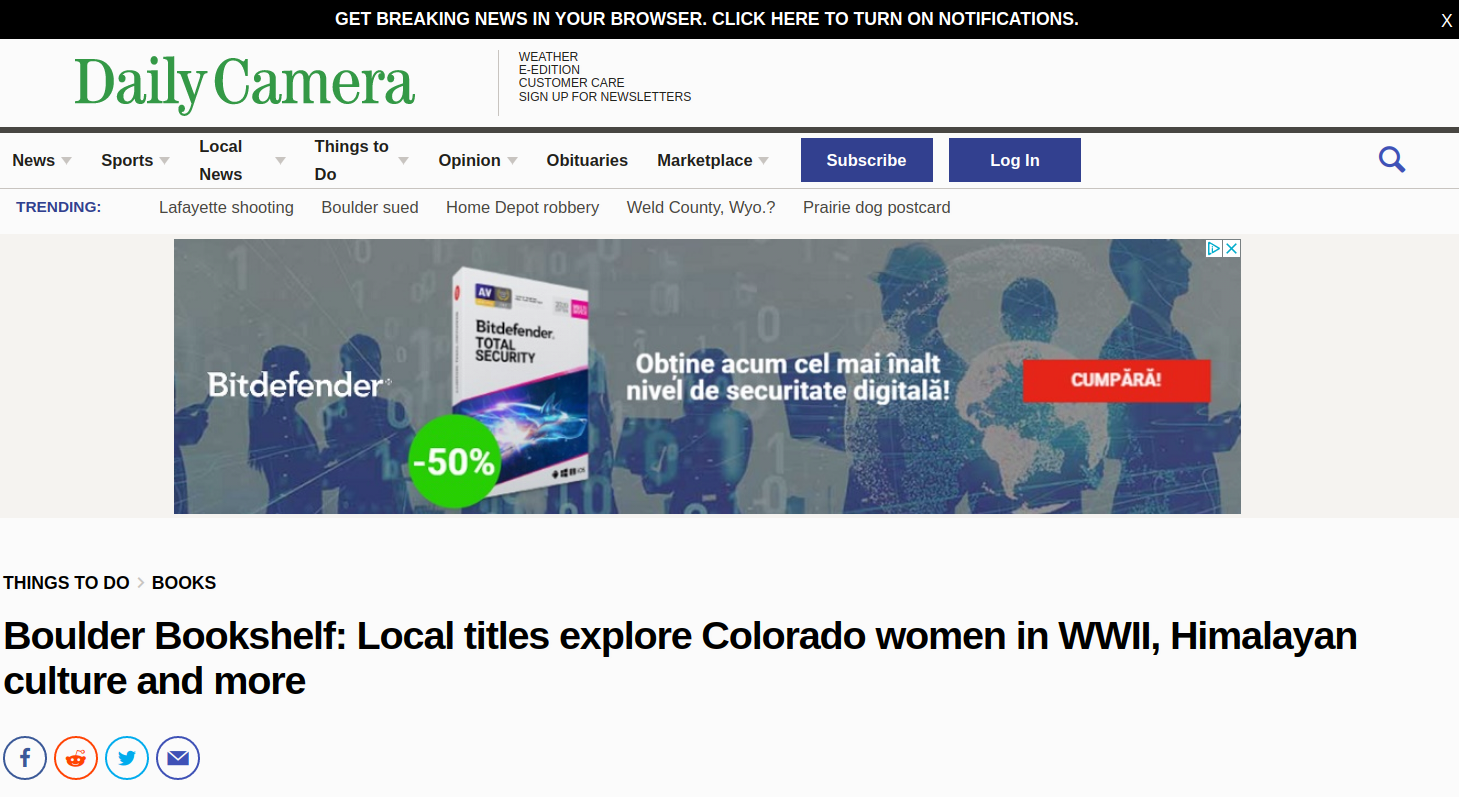 Bestselling Boulder novelist John Shors (“Beneath a Marble Sky,” “Unbound,” the “Demon Seeker” trilogy) once again does the things that have earned him a devoted fan base in his new novel. This unusual love story features beautifully evoked, far-flung settings, in this case, the gritty streets of Bangkok and the steep river canyons and rugged mountain trails in the shadow of Nepal’s towering Annapurna massif. Haunted by the loss of his beloved in the terrible tsunami of 2004, Owen feels unable to love again until he meeting a street orphan in Bangkok who introduces him to Suchin, a young Thai woman facing an early death. Together, as they climb toward the Himalayan heights, Owen and Suchin learn important lessons from each other about love, sacrifice and meaning.

Born in the Khumbu region of Nepal, home to Mount Everest, Pemba Sherpa grew up poor and became a full-time mountain guide as a teenager. He moved to the United States at 19 and settled in Boulder, where he founded Sherpa International, Sherpa’s restaurant and Sherpa Chai, and has worked tirelessly to improve the lives of Nepal’s Sherpa people. This highly readable, fast-moving memoir, written with Nederland’s James McVey, explores his life as a guide and offers insight into the Western fascination with, and ongoing disruption of, the Everest region.

In her first novel, Boulder author Maizes, author of the well-received story collection “We Love Anderson Cooper,” introduces readers to a truly unusual protagonist. La La Fine is a veterinary school dropout, animal empath and burglar. She breaks into houses along Colorado’s Front Range to pay her thief-locksmith father’s legal bills, but only houses where she senses there is an animal who needs her help. Police are baffled at crime scenes where the thief has provided medication and food for neglected pets, but La La is also trying to heal herself from the wounds of abandonment. Both the story and Maizes use of language are quirky, in a good way.

Recipes for a Sacred Life: True Stories and a Few Miracles

Long-time Boulder writer and community organizer Neshama spools out a memoir of sorts as a series of brightly etched vignettes focused on connections — between humans and with God. This updated version of the 2013 original features new material.

Boulder’s Carpenter knows a little something about living a healthy life. Following his retirement from a career in land conservation, the 73 year old set his sights on adventure — and in the past seven years he has hiked more than 17,300 miles, completing the Pacific Crest Trail and Appalachian Trail, and bicycled across the United States three times, among other adventures. His new book distills everything he knows about how he’s kept himself mentally and physically able to live a good life, with tons of science to back him up. Everything from sleeping better to defusing stress and living with purpose.

Leave It as It Is: A Journey Through Theodore Roosevelt’s American

Gessner, chair of the Creative Writing Department at the University of North Carolina Wilmington, got his start as a writer right here in Boulder and has gone on to become a New York Times bestseller and one of the nation’s top nature and environmental writers. In his ambitious new book, he travels to some of the places that were preserved largely due to Roosevelt’s unprecedented environmental crusading, from Bears Ears, Utah, to the site of his former North Dakota ranch, now Theodore Roosevelt National Park. He doesn’t shy from the great conservationist’s “problematic” views on race and other topics, but makes a powerful case for his legacy and sounds a warning shot that we must fight to protect it. Gessner will hold a virtual book event at Boulder Book Store Tuesday.

Denver historian Beaton, a frequent Chautauqua presenter, has put together a fascinating oral history of Colorado women and the roles they played during World War II. Many joined the military as nurses or non-combat enlisted personnel, while others went to work in plants producing the materiel needed to defeat the Nazis and Japanese Empire. Still others led blood and scrap-metal drives, hosted canteens, and more.